The DJI Ronin-SC Gimbal Stabilization brings many improvements over its predecessor, the Ronin-S, with this smaller and lighter stabilized, three-axis single-handle gimbal, designed for small mirrorless cameras under 4.4 lb. Though the Ronin-SC is smaller, it packs an abundance of features, design enhancements, and technology inside its compact form. The gimbal features stabilization, pan, tilt, and roll control, as well as 360° continuous panning to create steady 3D/360° motion shots.

The Ronin-SC features a record button and a joystick for precise gimbal control, as well as a re-center front trigger button to bring the gimbal back to its default position. There is also an M button that you can press and hold to enter Sport Mode, which provides fast tracking response when recording action sequences. Using the Android or iOS app over Bluetooth 5.0, Active Track 3.0 has been updated to help users track a subject with the gimbal without having to use any controls at all. Another handy function is DJI’s Force Mobile, which allows you to control your gimbal’s motion when it’s mounted on a rig or tripod using the gyroscope of your smartphone, allowing you to perform more precise gimbal movements using your own natural motion. Other built-in features include time-lapse and motion-lapse modes.

The Ronin-SC is powered by a 2450mAh rechargeable 18650 LiPo battery built into its handle, which lasts up to 11 hours on a single charge. It is charged via a USB Type-C port and can also provide camera control such as run/stop or focus pulling using one of the included multiport USB cables connected to a compatible camera. There are also 1/4″-20 and 3/8″-16 mounting threads on the handle to add accessories such as the included smartphone holder.

Use your phone’s gyroscope to motion-control the gimbal movement of the Ronin-SC with ultra-low latency, offering a precise and intuitive control experience.

Using the DJI Ronin app for Android and iOS you can control your camera to take photos at specific intervals which, when combined and sequenced in post, can yield creative time-lapse movies. You can also pre-set a path for the gimbal to follow during time-lapse photography inside the app.

With Active Track 3.0, you can program a repeatable gimbal movement and follow your subject without operator input.

When Auto Calibration is enabled, the gimbal will automatically set an appropriate motor stiffness value based on the weight of the mounted payload.

By offsetting the roll motor, the Ronin-SC holds the camera above the roll axis, leaving the camera’s LCD screen unblocked. This design also minimizes the camera shake that occurs when transitioning from upright to underslung modes and vice versa.

The Ronin-SC was built to be modular. Direct-connected and wireless accessories are supported.

The Ronin-SC can mount onto an RC buggy for low-angle shots or even act as a stabilized remote head when mounted to a jib.

Both 1/4″-20 and 3/8″-16 accessory mounts are allocated on the Ronin-SC, providing full support for add-ons such as a microphone, LED light, or a wireless video transmitter. 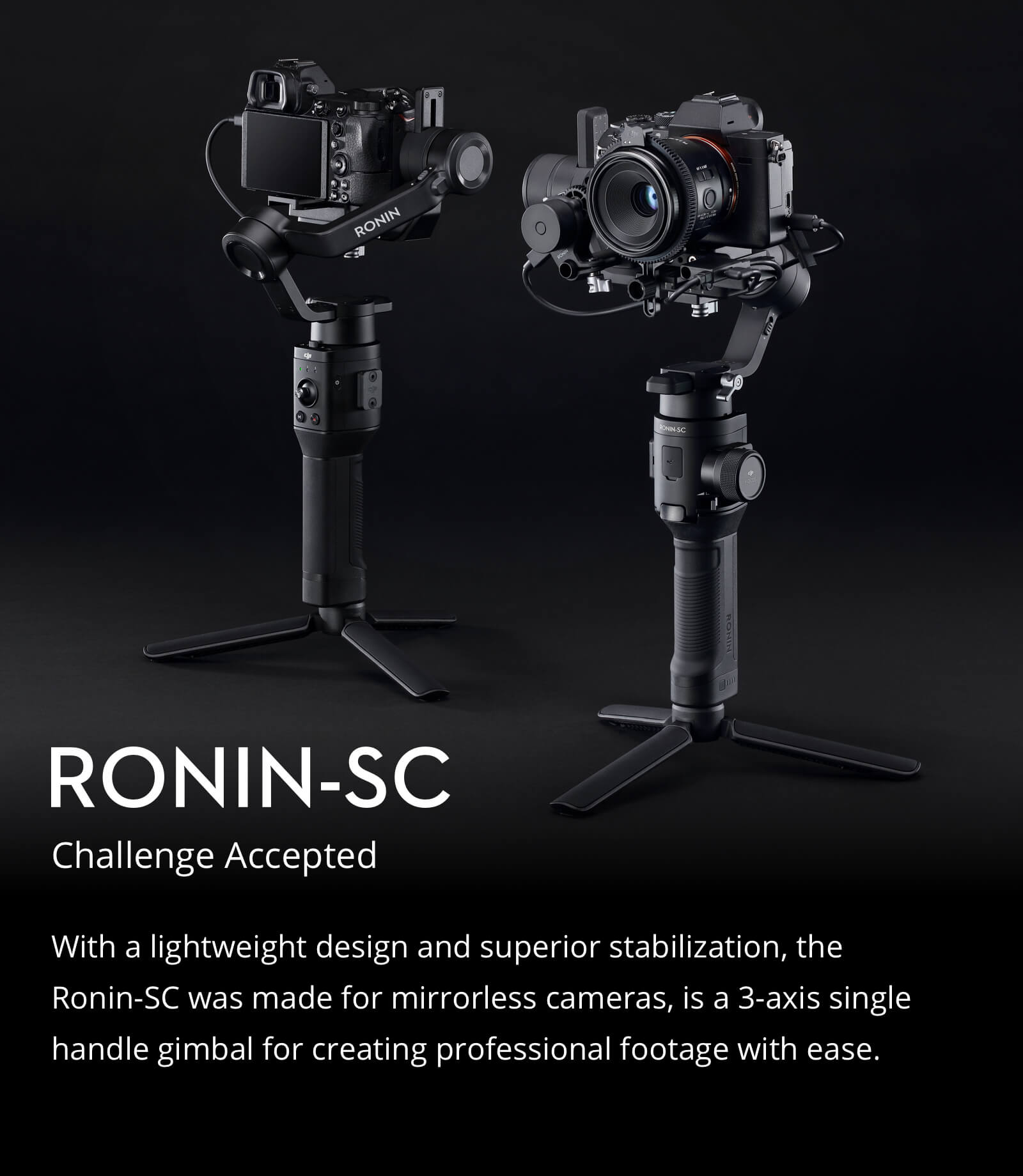 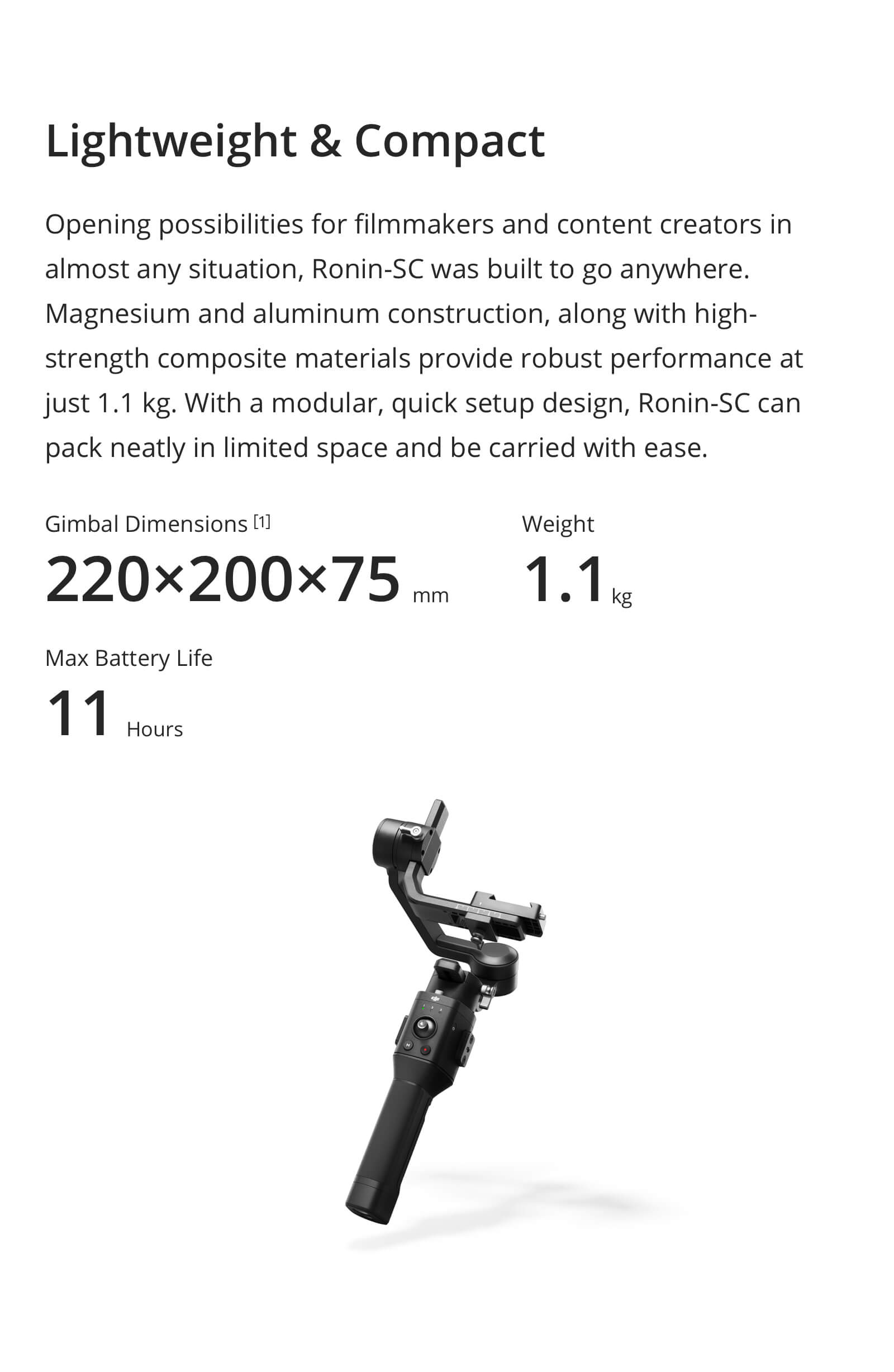 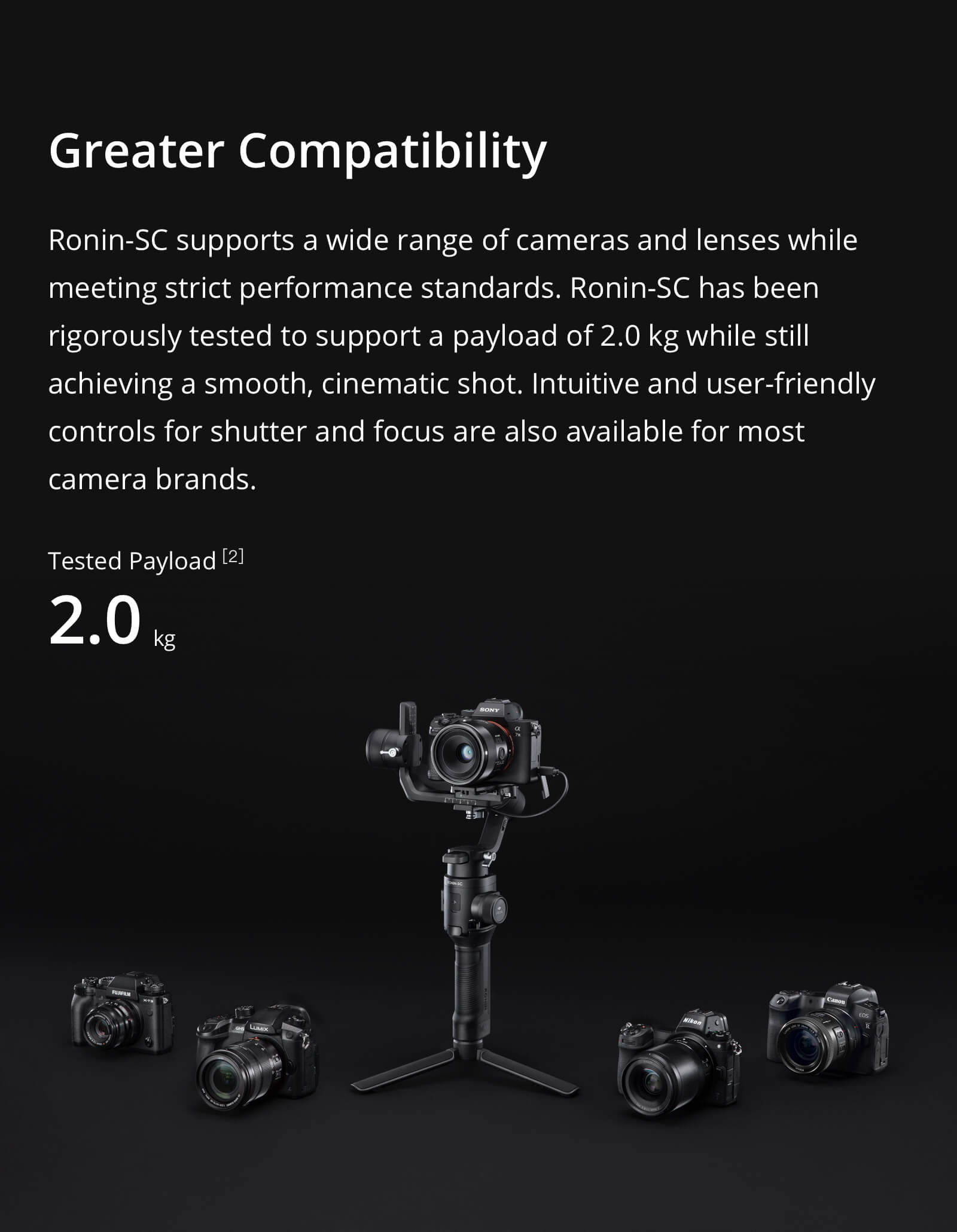 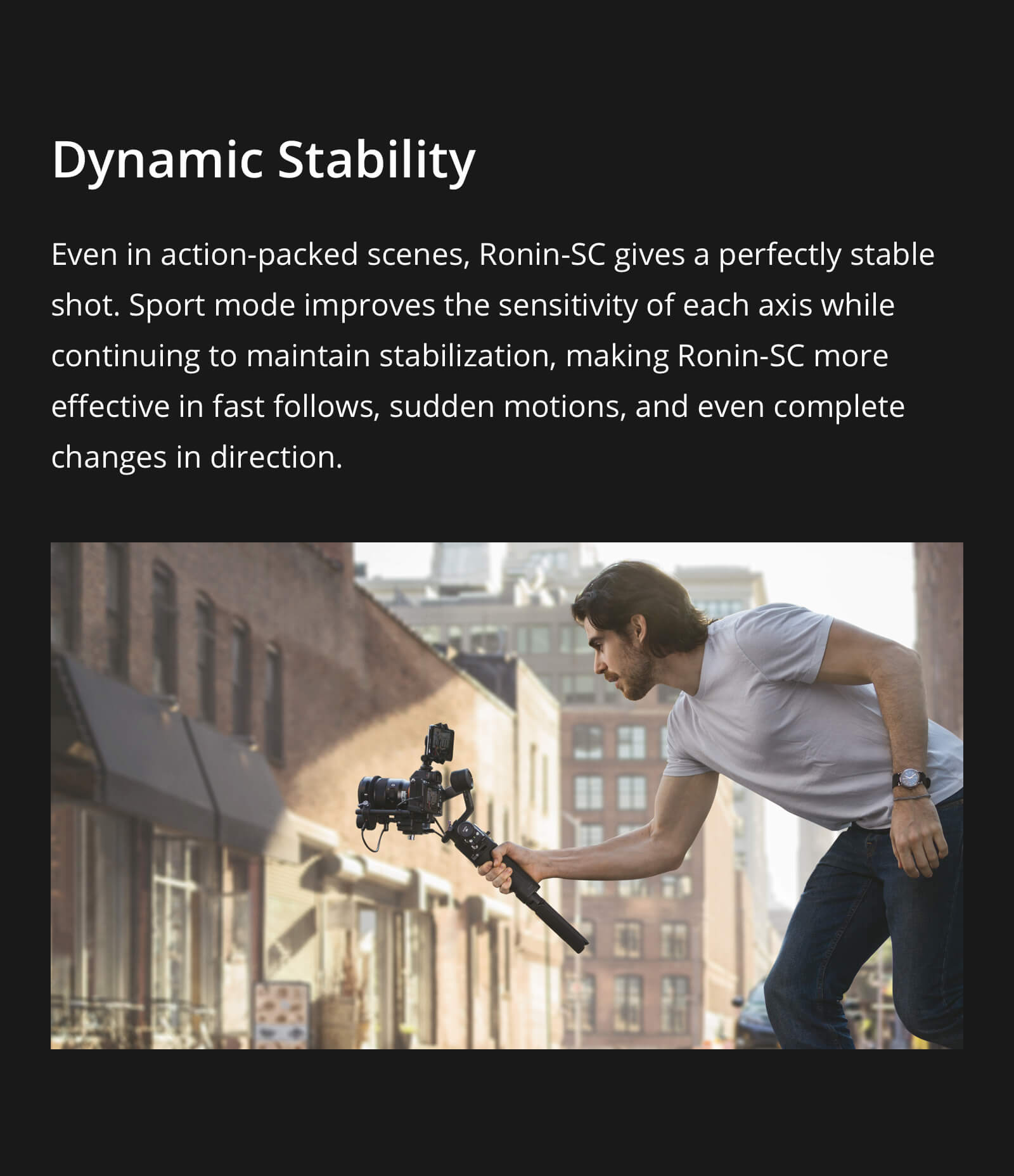 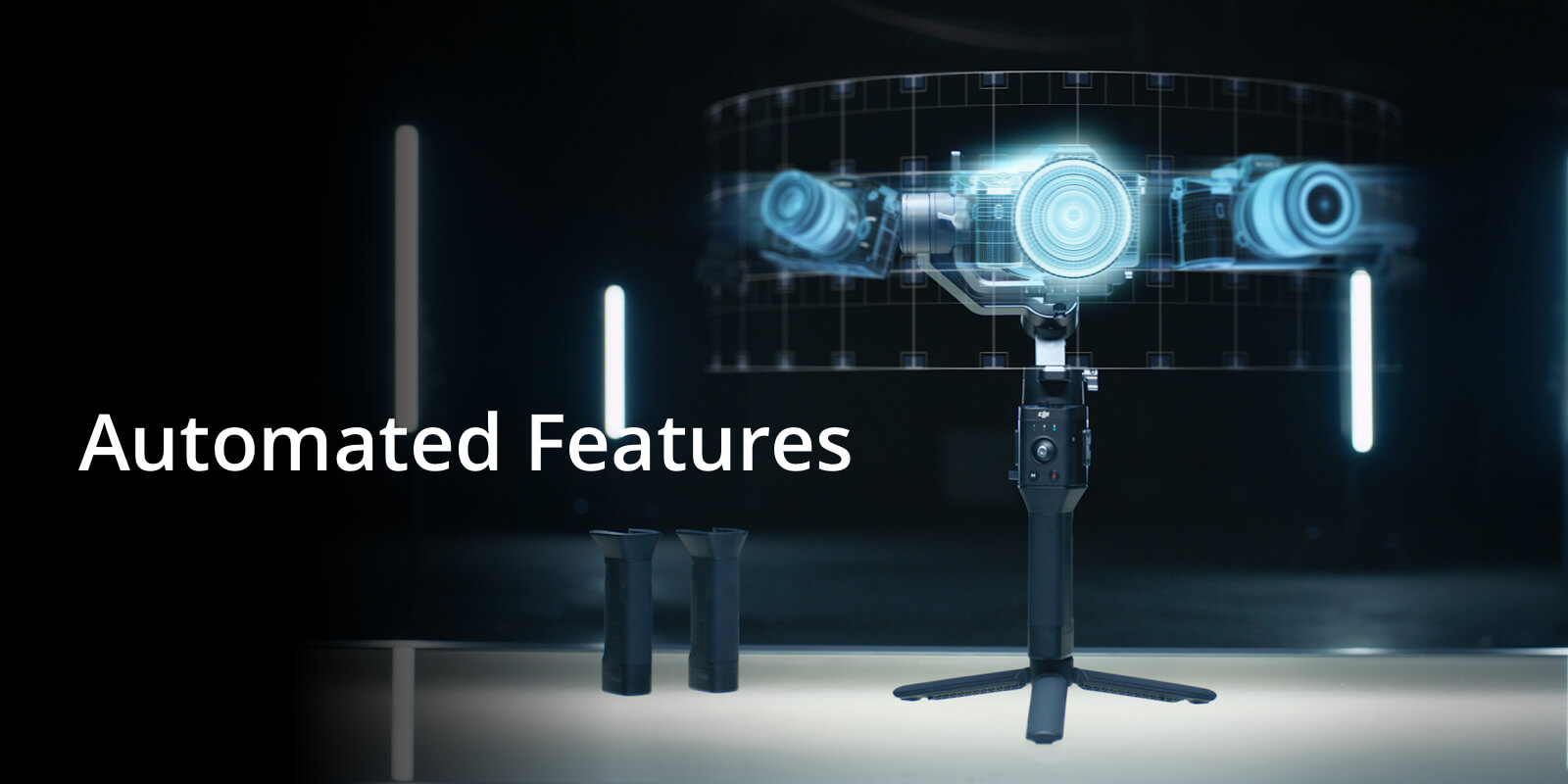 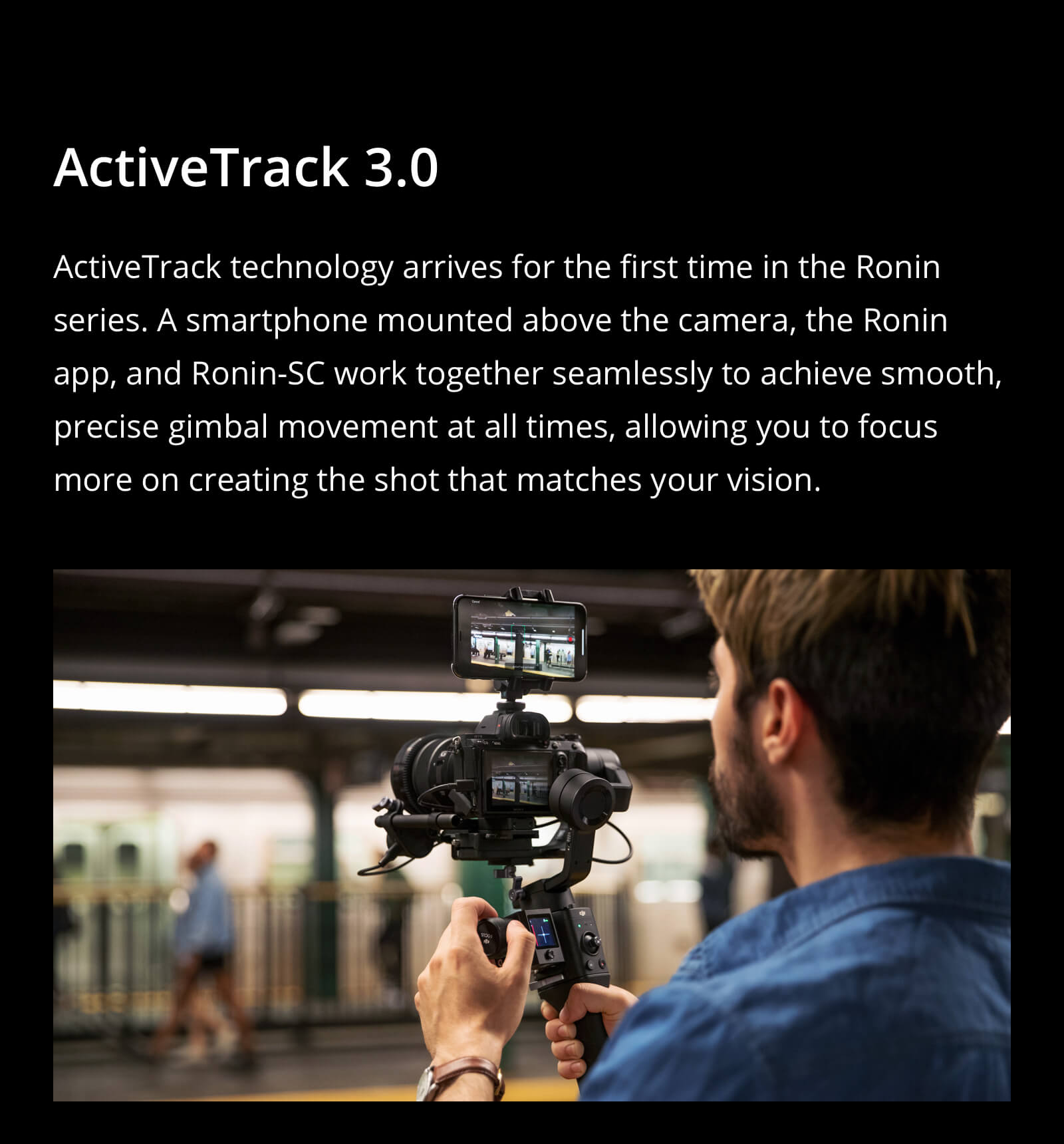 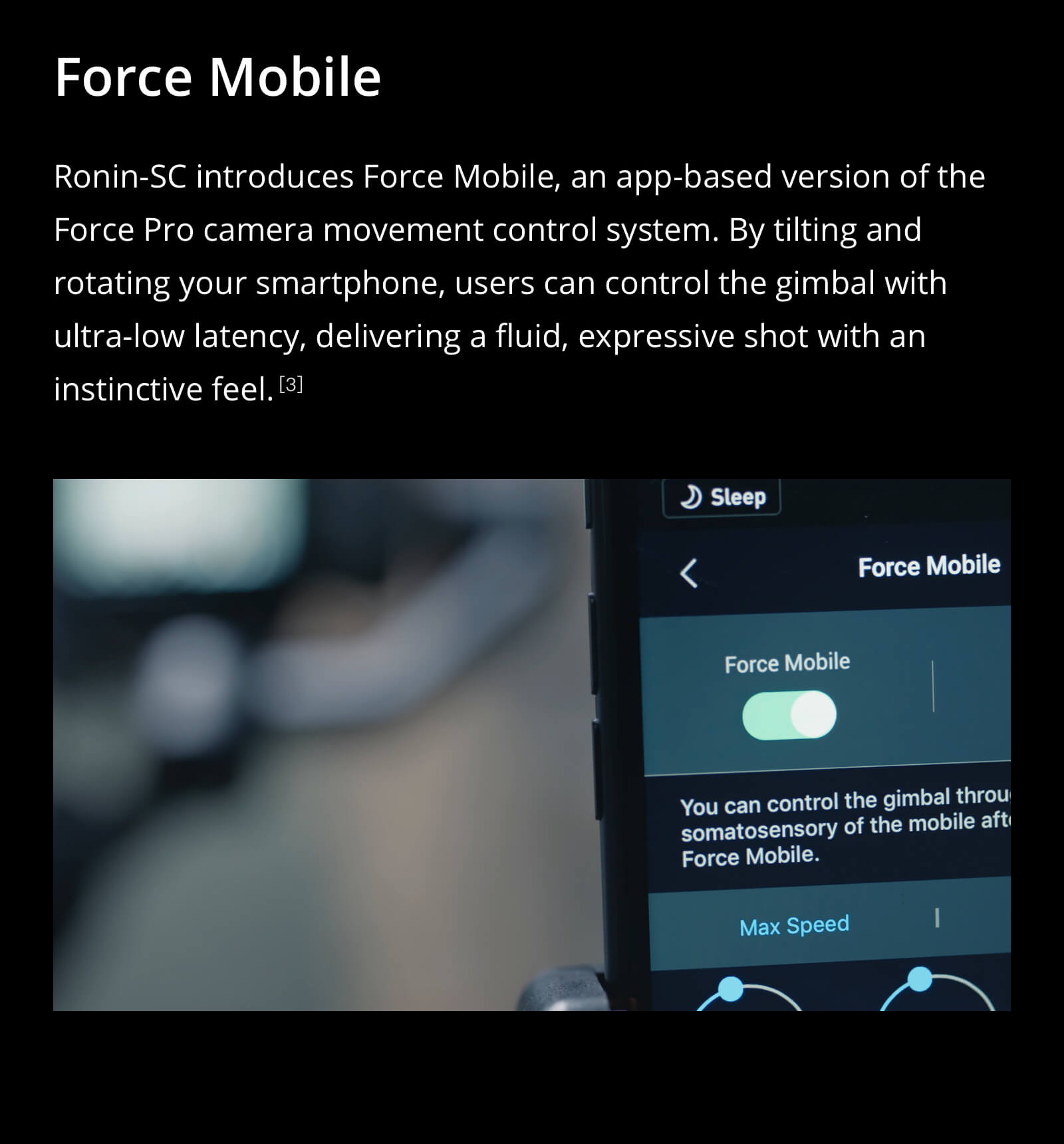 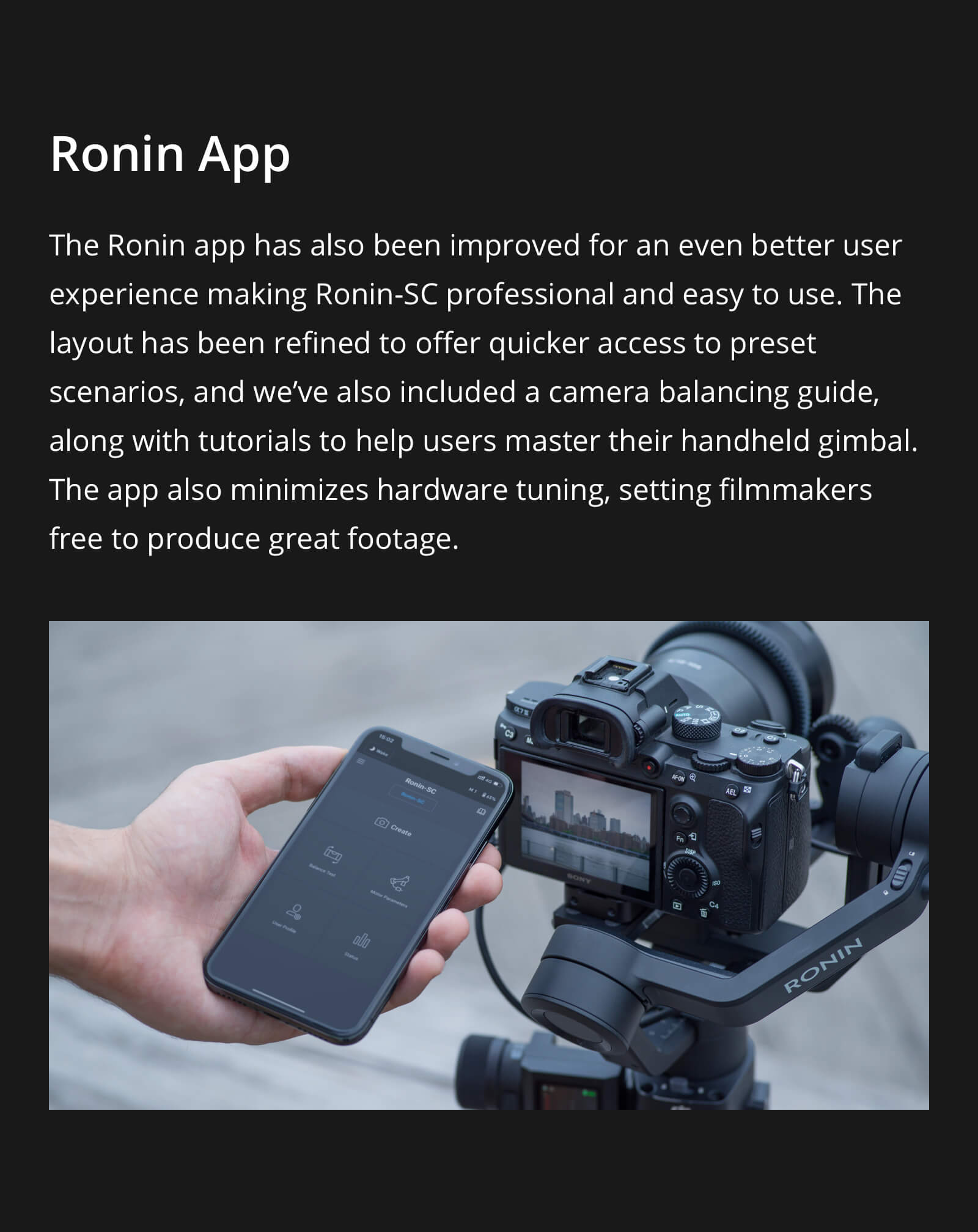 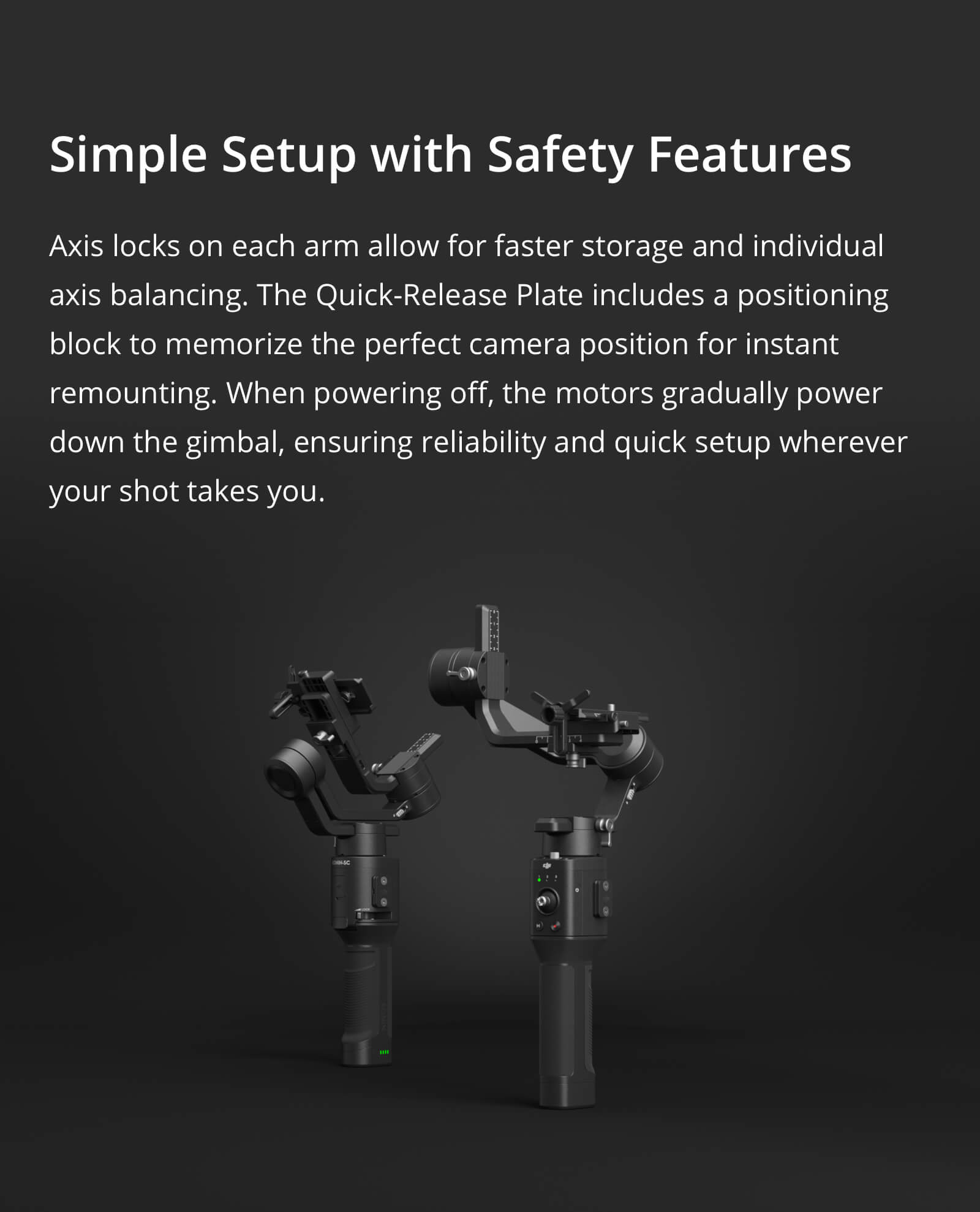 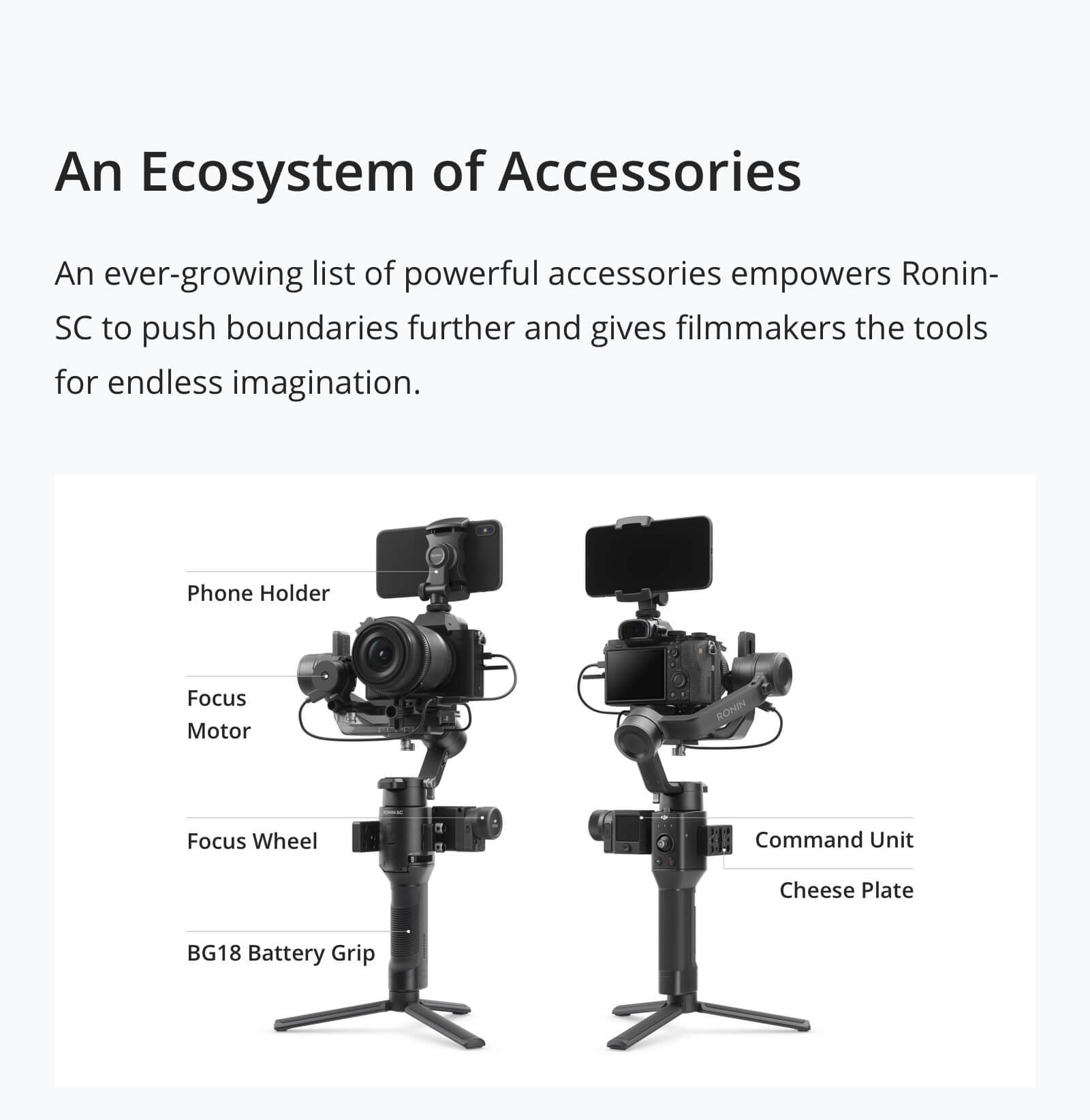 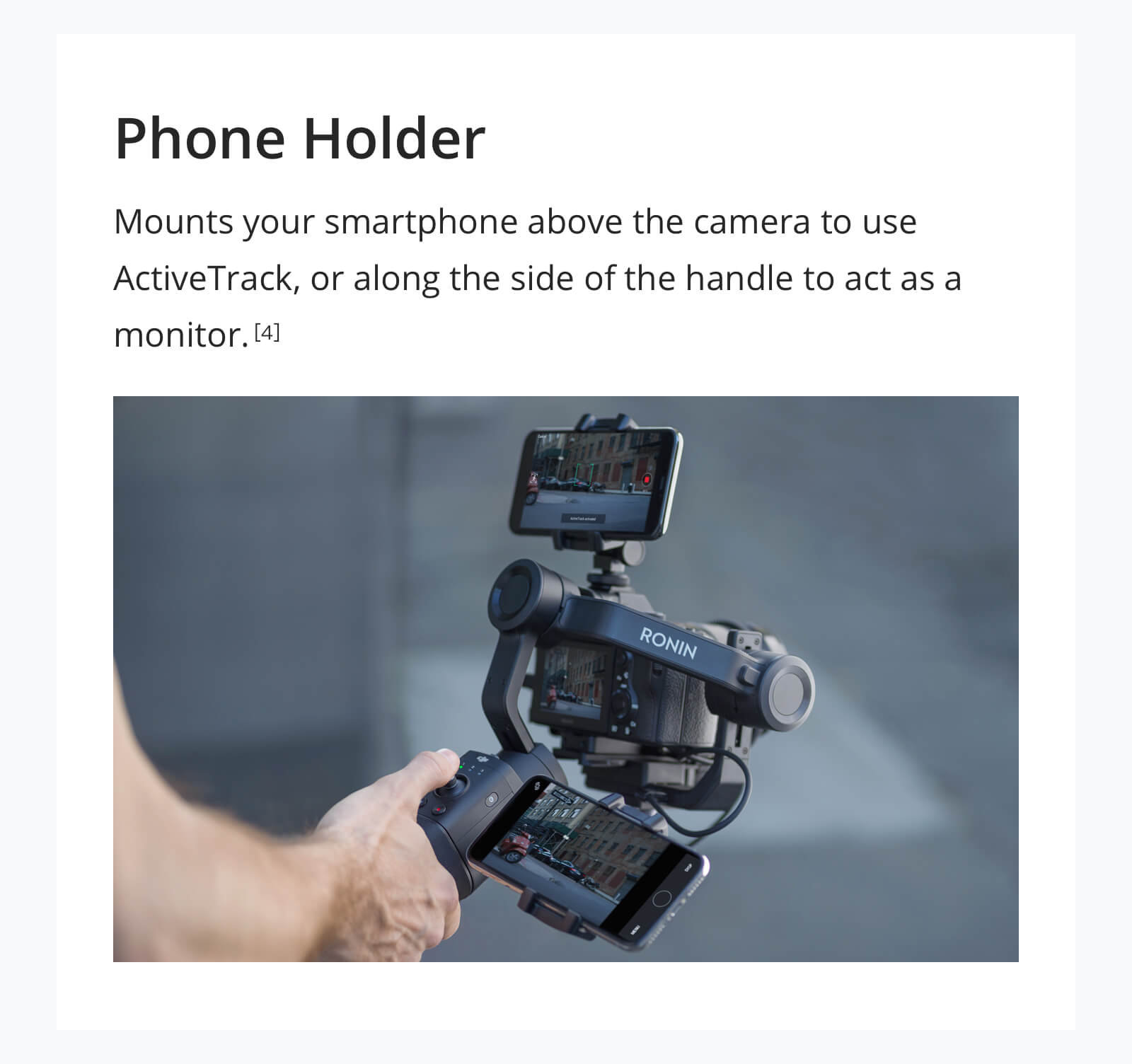 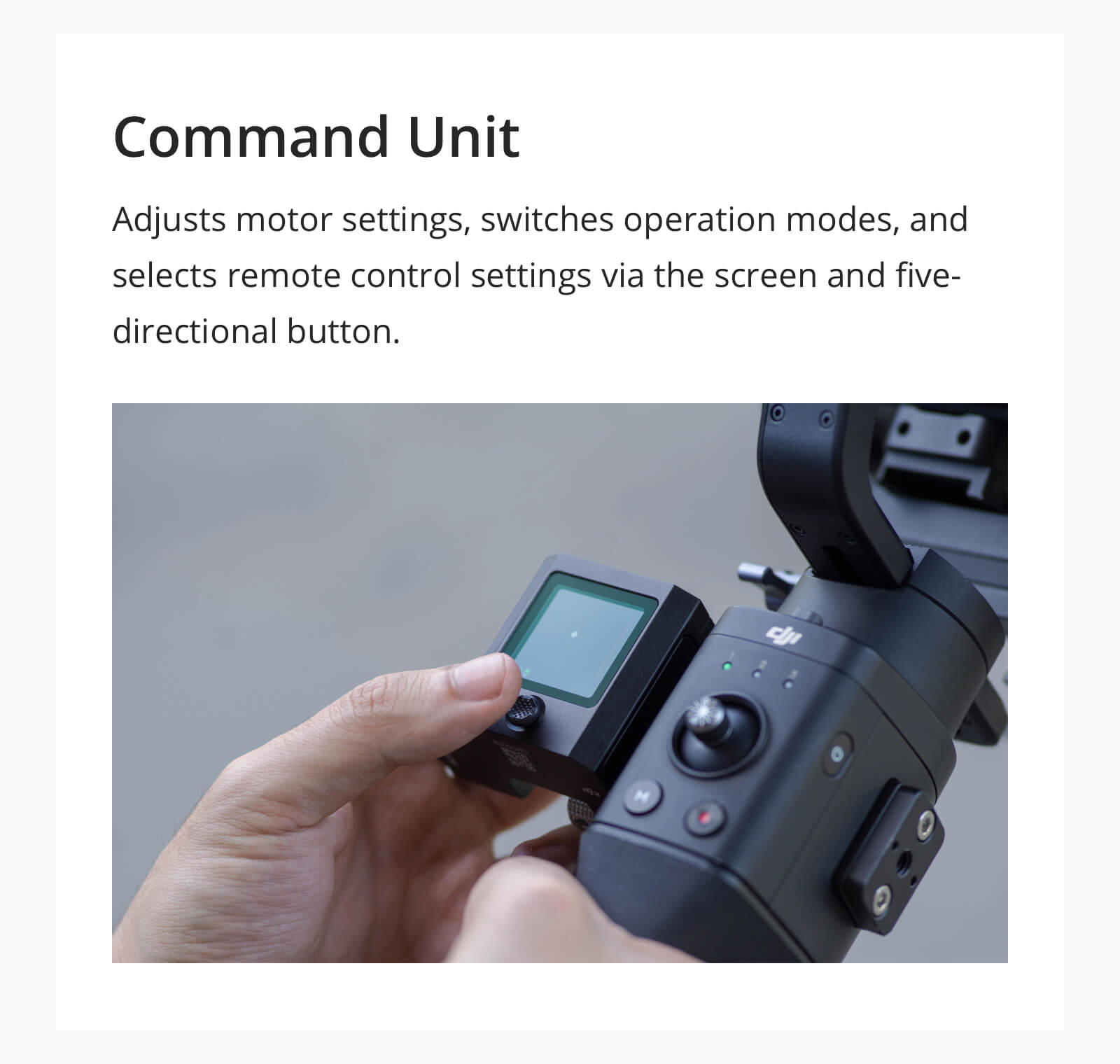 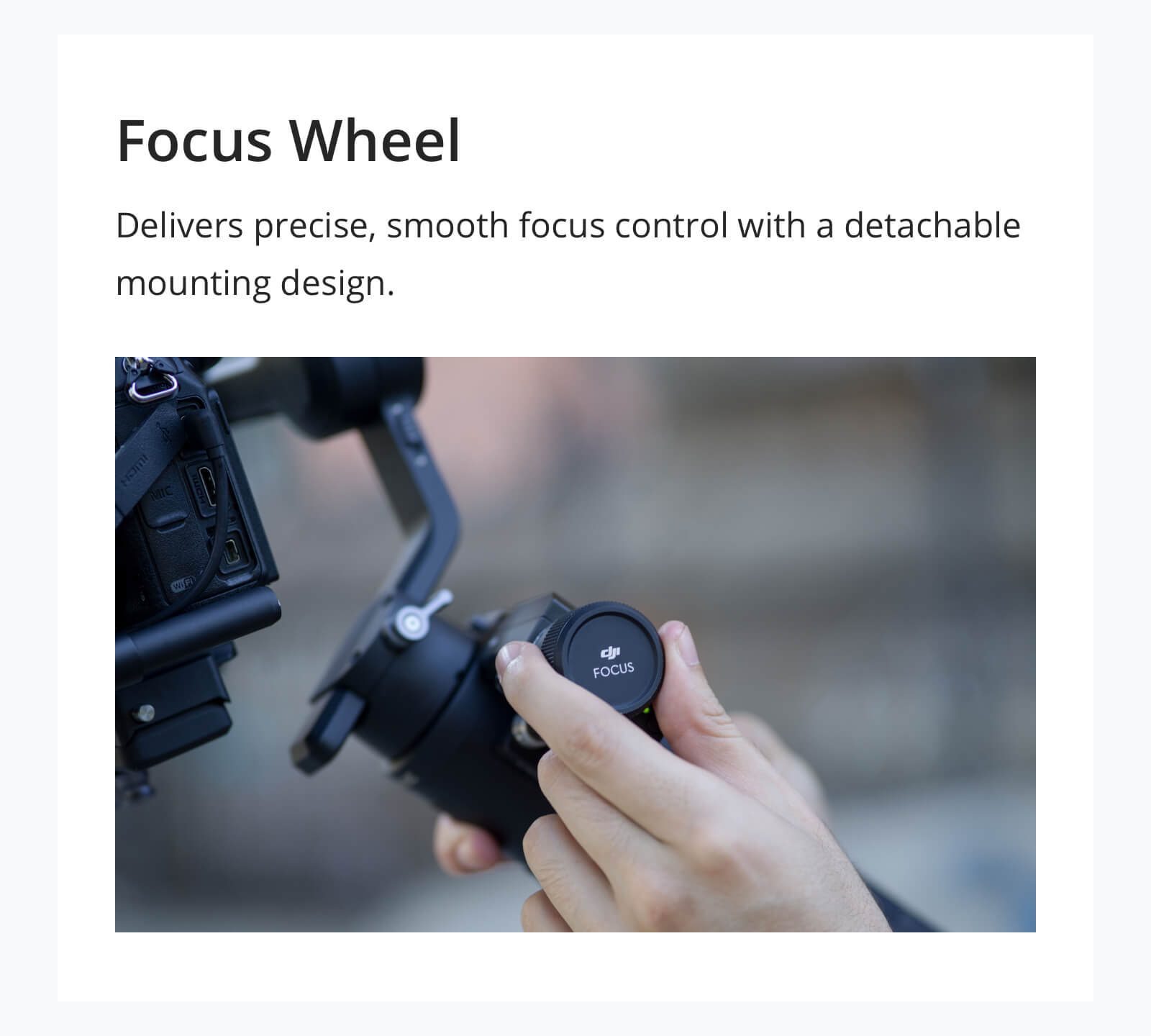 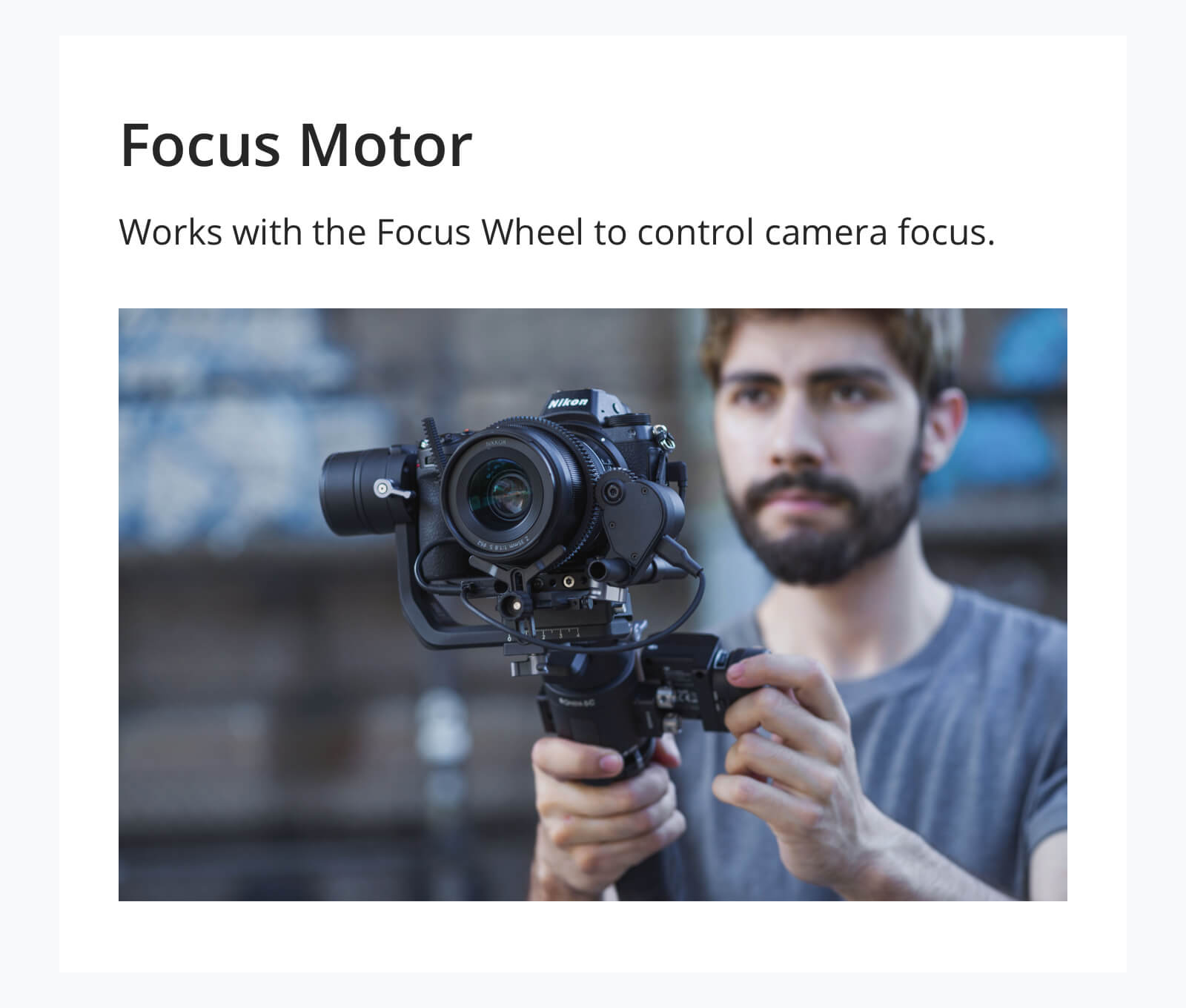 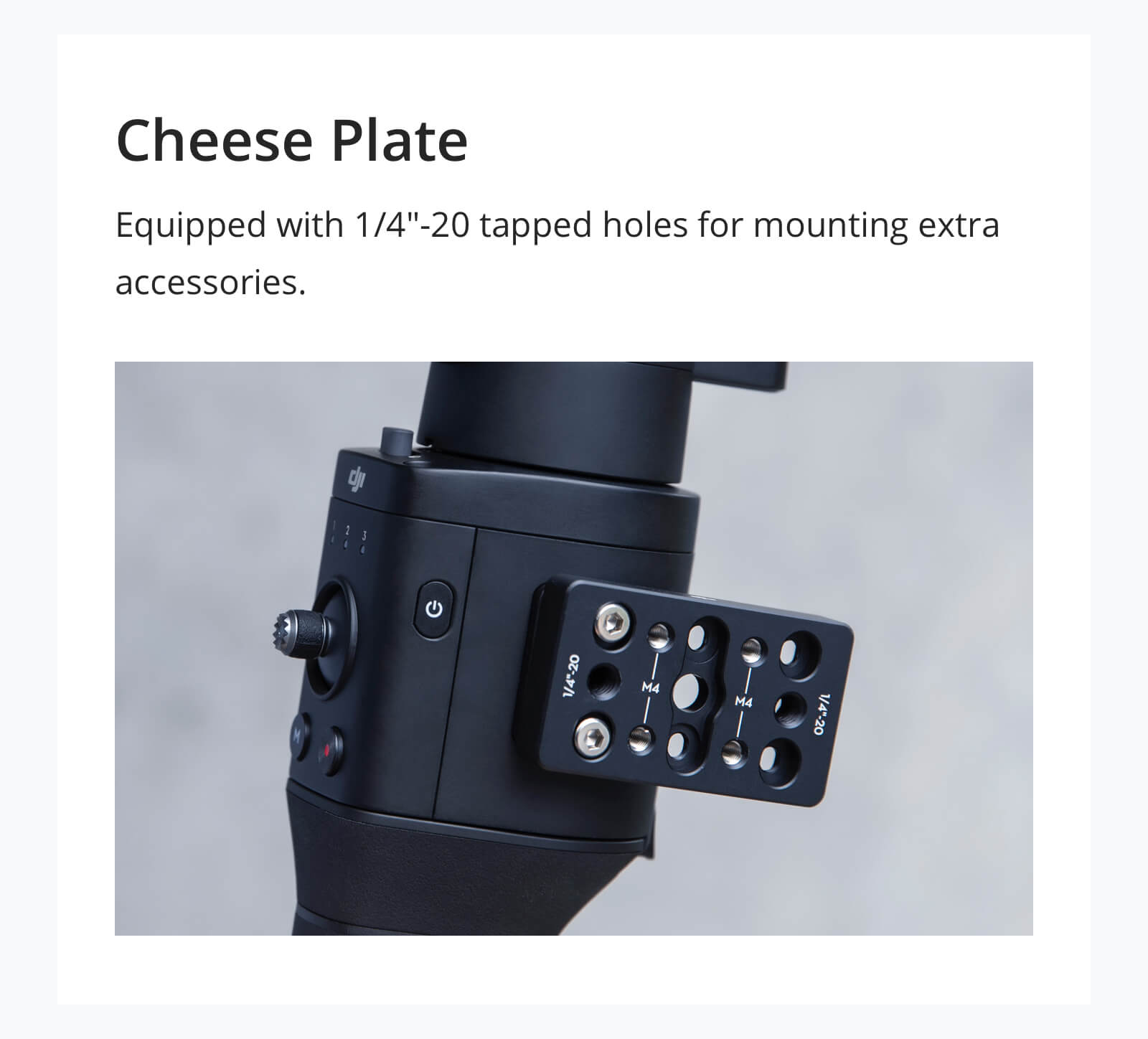 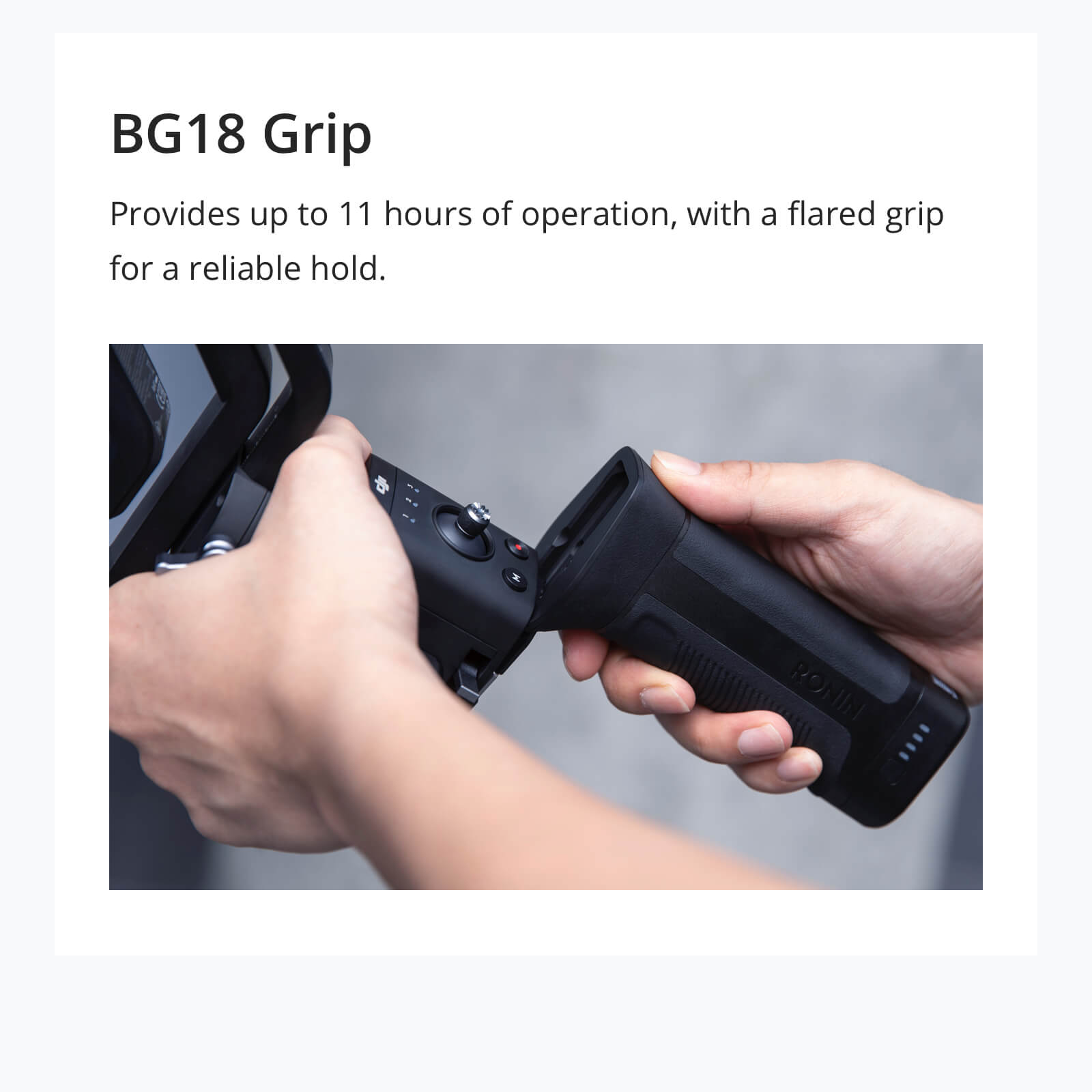